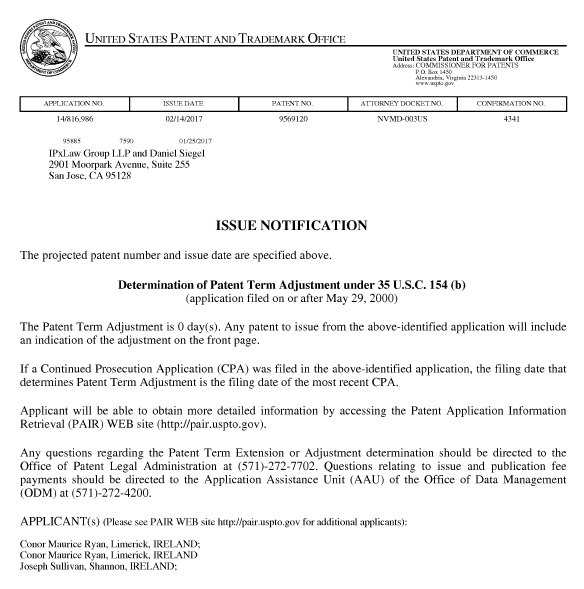 Dublin, Ireland: 21 March 2017: NVMdurance, with its unique approach to extending the endurance of flash devices and enabling 3D NAND, has announced that patent number 9,569,120 developed by Joe Sullivan and Conor Ryan, both of Limerick, Ireland, has been granted in the USA for Adaptive Flash Tuning. 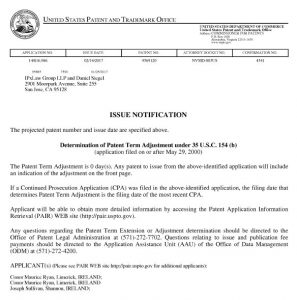 This patent covers NVMdurance Pathfinder and Navigator software, which discover optimal flash trim sets for the target application and implement a set of optimization techniques that constantly monitor the NAND flash health and autonomically adjusts the operating parameters in real time.

Before the flash memory product goes into production, NVMdurance Pathfinder determines multiple sets of viable flash register values, using a custom-built suite of machine-learning techniques. Then, running on the flash memory controller utilized in SSDs or other storage product, NVMdurance Navigator chooses which of these predetermined sets to use for each stage of life to increase the flash memory endurance.

NVMdurance software ensures that the flash lasts as long as possible without disclosure of “test” mode” information from the flash manufacturer. In an offline characterization phase, ‘test chips’ from a batch of recently manufactured flash memory chips are used to simulate various usage scenarios and measure the performance effects of writing and attempting to read test patterns written with different sets of operating parameters over time, simulating desired retention periods.

“The granting of this Adaptive Flash Tuning patent further proves how NVMdurance extends endurance and provides the ability to optimize NAND flash memory for the intended application,” said Pearse Coyle, NVMdurance CEO. “We will continue to file patent claims around the world to protect our unique solution.”

Flash memory is used to store data in Solid State Drives (SSDs), mobile phones, tablets and many other applications. NVMdurance has the world’s only automated solution for characterizing flash memory, which enables suppliers and adopters of flash to improve reliability, accelerate their deployment of new types of flash, differentiate their solutions, and optimize around customer usage conditions.

NVMdurance was founded in Ireland in 2013 when the ADAPT project was spun out of the National Digital Research Centre in Ireland. The technology is the result of 12 years’ prior work on Flash memory endurance by Joe Sullivan and Conor Ryan. The company has offices in Limerick, Ireland and San Jose, California. www.nvmdurance.com