Some Limericks were sent in by Anthony Cappellini  on 13 August after the competition closed. Added here for your amusement.

4 August: It’s been a while but entries close as 12 noon (Santa Clara time) next Thursday, so I reckon there’ll be a few more entries at FMS. This one from Tom Friend, Illuminosi.

There once was a VC named Steve
Huge returns he hoped to achieve
So with much great assurance
He bet on NVMdurance
What a tangled web he did weave!


Read the rules and how to enter here

An electron once lived on a gate
Where it floated in a negative state
But to the drain it would go
When a programmer said so
That’s how flash memory will operate!

Kevin Crow from Intel’s enthusiasm let to a limerick style poem. 20th May

So now it’s time to rehash
Some of the benefits of going with flash
Performance undeniable
Durability reliable
With a bonus reduction of cache!

We have a few entries from Black Diamond Solutions in Chicago. Well done lads. All excellent. The co-founder theme is going well here again!

There once was an admin named Joe
Who got scolded cause his database was slow
When he added some flash
They threw him a bash
And the legend of Joe starts to grow!

We once worked with disk that would turn
Then came flash but the writes made them burn
While the problem persisted
Ryan and Sully insisted
Our software will nix this concern!

There once was a memory called NAND
Whose lifetime was somewhat too bland
We invented a path
With DSP and some math
To attain something exceedingly grand!

A bit of a theme is developing with NVMdurance employees. Here’s one from Conor Ryan.

There was a young boy named Joe 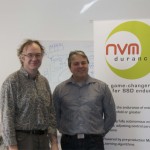 Here’s our second entry. It’s from our very own Jeannie Fitzgerald and it’s a good un. Although I’m not sure employees can win.

Our first entry is from Kevin Kilbuck of Micron.

Flash suppliers continue to shrink,
But that makes the endurance stink
And so the electrons
Keep acting like morons
So good flash management is required
And new and innovative IP is inspired

There is one line too many (just 5 lines in a limerick). An updated version was provided by Kevin on 21 May with the 5 lines and the AABBA rhyming requirement!

Flash geometries continue to shrink
But that makes the endurance stink
So good flash management is required
New and innovative IP is inspired
And the industry moves on, I think

from Zsolt Kerekes of Storage Search.com – the inspiration for the competition. Read his article about it.