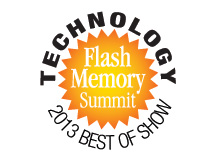 NVMdurance is a spinout from the Irish National Digital Research Centre (NDRC). The company’s software technology improves the endurance of flash devices in solid-state disks, allowing them to last up to 10 times longer. NVMdurance introduced its technology and demonstrated results at Flash Memory Summit. The company is now engaged in technical trials with several leading suppliers.

New Venture Partners is leading a €250,000 seed capital investment to commercialize and grow the business. NDRC previously invested in the opportunity during its research phase and are also co-investing in this round.

Pearse Coyle, CEO of NVMdurance, spoke after receiving the award and announced the quarter of a million euro investment,
“This award and the backing of a major venture firm are milestones for NVMdurance and will aid us as we grow our business and act as supplier to the storage firms we are targeting and with whom we are currently running technical trials.”

“The company is now embarking on a series of customer trials with a view to our software being used on solid state disks from one or more of the major manufacturers in mid-2014. As part of our growth plans we are commencing the raising of a larger round of funding to support the commercial roll-out of the technology,” he added.

“NDRC looks for novel science and technology, substantial market opportunity, great entrepreneurial talent, and deep international connectivity with capital and customers. NVMdurance has all of these elements in abundance and now has a tremendous opportunity to become a global leader in flash memory optimization,” says Dan Crowley, NDRC Director.

Steve Socolof, Managing Partner of New Venture Partners added, “We are very pleased to make our first investment in Ireland in an opportunity that can make such a difference to the exploding market for solid-state storage.”

NVMdurance was formed in 2013 as a spin-out from the NDRC. Solid State Disks (SSDs) using non-volatile flash memory are rapidly penetrating the storage market. One problem is that flash has limited endurance and eventually wears out. NVMdurance extends the life of SSDs by up to ten times. NVMdurance is based in Limerick Ireland and San Jose California. www.nvmdurance.com

NDRC builds high-impact new ventures. By providing the people, time, space and investment needed at the earliest stages of dedicated commercialization work, NDRC is creating companies worthy of commercial investment and with the ability to scale.

The NDRC team has the breadth of knowledge and expertise in technology and markets. NDRC works side-by-side with researchers, entrepreneurs and venture teams to turn great ideas into successful new ventures. For more information, visit www.ndrc.ie