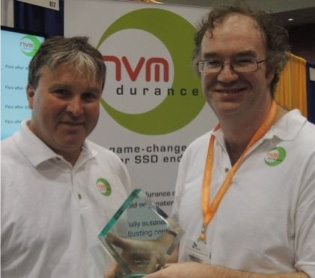 Flash chips are plugging into new sockets in servers, networks — even smartphones. That’s one takeaway from a quick tour of innovations at the Flash Memory Summit here. Increasingly dense and low-cost chips are enabling new alternatives in the system memory hierarchy between DRAMs and hard drives and opening up new opportunities.

Ironically, two of the more popular innovators at the event were in a small booth at the back of the show floor. Conor Ryan and Joe Sullivan of the two-month-old startup NVMdurance won a best of show award for their 10-fold increase in flash endurance — an Achilles’ heel of the otherwise hot memory chips. 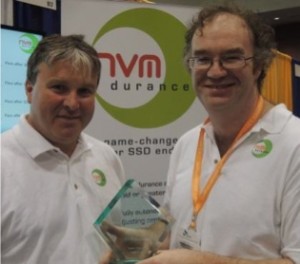 Ryan, a professor of machine learning at the University of Limerick, developed a program that can find optimal methods for handling reads and writes to a flash chip within four months. Sullivan, his PhD student and a former Analog Devices engineer, helped find a way to apply those learnings in a solid-state drive controller. Now the two are licensing their technology and getting requests for demos from the likes of Intel and LSI.

Their approach controls functions such as the level of current, the number of pulses, and retries when a controller does a read or write. Ryan told us the factors need to change through the life of a flash chip to optimize its endurance.

See the article on EE Times